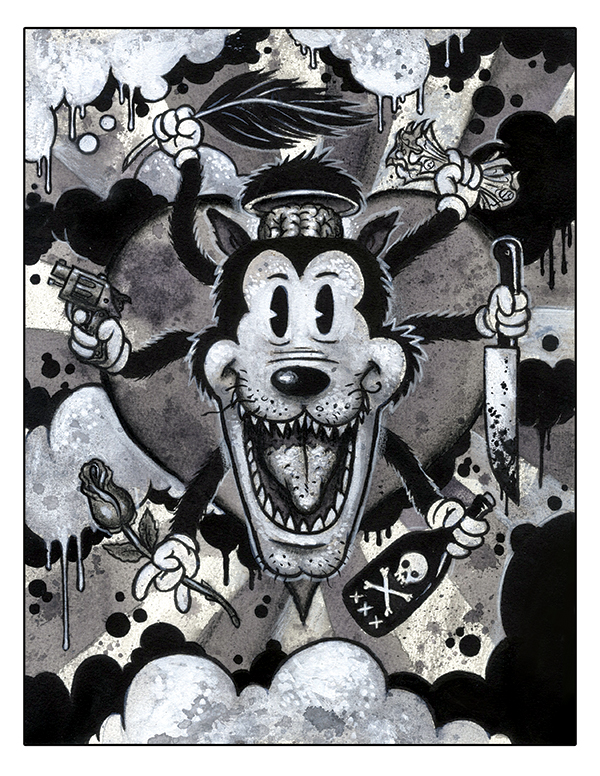 Wolf’s Poison is a painting done in acylic, ink and charcoal on illustration board. This was an early work completed in 2014 and it started me on a journey to create more works inspired by vintage rubber hose era cartoons. Inspired by the Fleischer Animation Studios, Ub Iwerks, early Disney and Warner Brothers cartoons, I added a creep and horrror factor and let my mind and hand wander. This continues to be an exciting artistic journey for me. This painting was featured at an exhibition at the La Luz de Jesus Gallery

Established in 1986 La Luz de Jesus Gallery is the brainchild of entrepreneur and art collector Billy Shire, considered primarily responsible for fostering a new school of California art and prompting JUXTAPOZ Magazine to dub him “the Peggy Guggenheim of Lowbrow.”

Showcasing mainly figurative, narrative paintings and unusual sculpture, the exhibitions are post-pop with content ranging from folk to outsider to religious to sexually deviant. The gallery’s objective is to bring underground art and counter-culture to the masses. Past shows have been groundbreaking, exhibiting artists, such as Manuel Ocampo, Joe Coleman, and Robert Williams.

Whether you’re a private collector, museum curator, set decorator, interior designer, or seeking art for a corporate or professional setting, La Luz de Jesus Gallery can find you exactly what you want. With La Luz de Jesus Gallery’s worldwide network of contacts, we can locate and acquire work from the world’s most sought-after contemporary artists via our Art Advisor Service.

Here’s one of my paintings from a few years back. Most of these works are inspired by classic cartoons and rubber hose era animation. I love the old Betty Boop and Fleischer Brothers animation style. Warner Brothers and Ub Iwerks also had a great style in the 1920s and 1930s. Even the comics and newspaper strips had this look and feel. They are very fun and playful but also have a very creepy feel as well.

Prints are available in my online store.

Check out some new products in my store:

New comics are available at the ASYLUM PRESS store:

📽️We don’t have any screenings planned for December, anyone wanna watch Fleischer cartoons with us in Los Angeles?📽️